3 Things I Learned about Sales from Watching a Triathlon 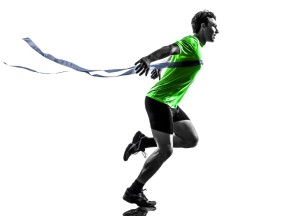 Have you ever been watching something, whether a TV show, movie or live event, and had it remind you of something completely unrelated?

This recently happened to me as I was watching a triathlon. While watching the athletes bike, swim, and run, I noticed a lot of similarities between the competition and the art of sales.

Here are three things I learned about sales from watching a triathlon:

1. The winners go in with a strategy and a plan to win.

2. Winners adjust as needed during the course of the race.

During the triathlon, one runner cramped up on the swim and later said in an interview that he knew he needed to make up time on the run.

In sales, you need to acknowledge if and when you drop the ball—whether it be a missed deadline, a misguided estimate, or a failure to deliver—and compensate accordingly. Not only should you correct your misstep, you should go above and beyond to prove that you can and will go the extra mile and stick to your word.

3. It only matters how you finish.

There was a runner who led for the entire race. However, it became clear that he was in distress during the final mile. His pace slowed and he cramped up.

In the final quarter mile, he was overtaken. He ran a great race, but it only mattered if he finished first.

In sales, there is no second place. You get no trophies or medals for coming in second or third—you only get the deal if you finish first. At the end of the day, winning is everything in sales.

One of the most important lessons I learned from watching the triathlon was that of perseverance. In sales, rejection is a common thing; it’s improbable that you’ll win every deal. Therefore, it’s paramount that you keep pushing on despite lost deals.

The more you persevere, the more sales opportunities you’ll have and the more deals you’ll ultimately close. Don’t stop short of the finish line…run through it!